Be Careful of Spending Money on Advertising for Your Business

I am generally opposed to traditional advertising for my clients unless they have very deep pockets. Advertising does not work very well. Marketing is a new game with a fairly level playing field. Marketing is for the smart. Money cannot buy results that ‘smart’ can generate.

And when advertising goes wrong, it really goes wrong. 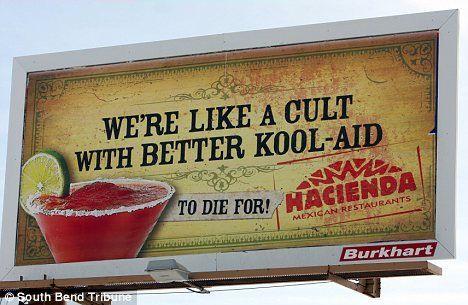 This would almost work without “TO DIE FOR!”   Almost.

This restaurant is in a city somewhere with lots of people with I-Phones, Twitter accounts, Facebook pages and YouTube access. All of those vehicles can be reached for free, for fun with great results if the business is smart.

Now, pick a number. 5? Okay, if just 5% of those eyeballs come to her restaurant, that’s potentially hundreds of new customers. Conservative? Okay, even 1% of thousands is a lot.

So she spent money for the design. She spent money to have this artwork produced. And then she entered a contract to keep this up for a month or two or three…the cost can run from $3,000 and up per month. Add $2,000 for the “art”.

That’s a lot of tacos. Now consider this…scroll down please.